Today the Brisbane River peaked at 4.45m, thankfully under the expected high.   The stormwater drain near our Studio was kind to us, so we have had no water in our home or our Studio.  We are lucky.  We will reopen on Monday when more roads are open and our staff are able to travel again.    Thank you to all of you who have sent your well wishes to us.   Please send your love and prayers to those that have not been so fortunate.   We have close family and friends who have lost a great deal.

Brisbane is a very strange place today.   It is quiet.  Businesses are closed. Supermarket shelves are empty.  Many are without power.   The sun is shining though and it is a hot and steamy day.   In those areas not flood-affected, life is as normal, although no-one feels normal.  So many areas have been completely devastated, yet so many areas have not be touched at all.  Sometimes only a street or a hill separates the lucky ones from tragedy.

When I’ve been in checking on the Studio, I took some snaps of the water in nearby areas.   Areas near us have been relatively unaffected.   These images don’t touch on what it is like in many suburbs of Brisbane.   Things have really changed.

The image below was just shot 5 days ago, my first wedding for the year.  Matthew and Ainsley escaped the rain.  They had their wedding reception along the Brisbane river.  The shot after shows you how the river has changed in less than a week.

Towards the story bridge last Saturday.

From a similar angle yesterday (Wednesday) when the river was a bit over 3 mtrs.  The ferry terminal already destroyed (on both side of the river).  Between the ferry terminal and the building is supposed to be the walkway that you see in the previous image.

Not far from my home  I got this shot of Northey Street Windsor yesterday.  Just off one of the main roads in Brisbane.

And just around the corner from there.

The Brisbane River raging through the City, about 300 metres from the studio.  This shot was taken on Wednesday.  Flood waters peaked today (Thursday).

View over the river to Southbank. Totally inundated with water.  If you don’t know Southbank in Brissy there is usually a big boardwalk and park area that runs in front of the Brisbane Eye (the big wheel).

THURSDAY MORNING, just after the flood had peaked and on my way to check the studio.

New Farm Park.  Ironically this is where Penny and I got married.  There isn’t supposed to be a lake here.

The next few are images from in and around New Farm, Brunswick street and New farm park.    i have taken many photographs in this area over the years, but it NEVER looked like this. 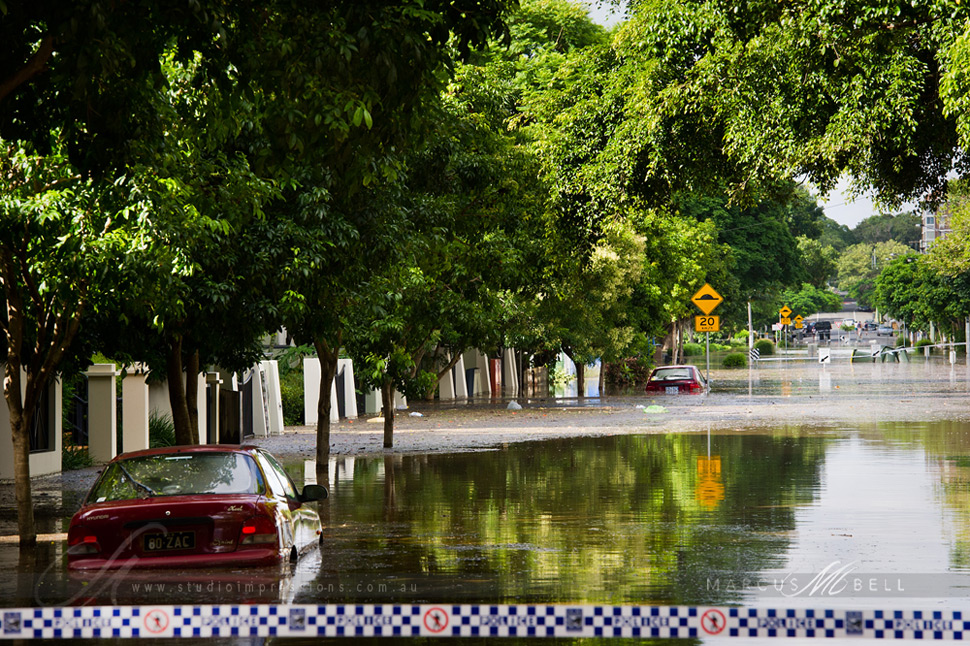 Near Parliament house and the Riverside Expressway.

New Farm Park.  The row of poles on the left are actually a few metres from the banks of the river.  Not today.

This sign at the Powerhouse says “Flood” and marks where the 1974 floodline was.    This image is for Adam, who has helped me out by flying to the US so I could be with family.  I know he would have loved to capture it and thought I would take it for him.  Thank you for all your help through this too,  Mate.

The river was about 1m less than was expected.  It doesn’t seem like much, but for many of us, it made a big difference.

Now we will all pitch in for the clean up.

6 thoughts on “Brisbane Under Water”